Applications of ADCs are widening and improvements in the manufacturing process meet industry requirements.

As the number of ADCs used in drug development and actual healthcare treatment expands, so does pressure to intensify their development, driving advanced manufacturing techniques and supply chain innovation.

Growth in new ADC uses
The ADC biopharmaceuticals sector has seen a big trend towards R&D into new uses of ADCs—both in terms of combination drugs for treating cancer and the application of the drug class for the treatment of other diseases beyond the realm of cancer indications.

Research has shown that antibody drug conjugates have application as anti-inflammatory agents, anti-microbials and anti virals. Analysis by Beacon Targeted Therapies shows that clinical trials for ADCs are already underway to test their effectiveness in treating a number of non-cancer indications. There are currently nine trials that are focused on diffuse cutaneous systemic sclerosis, systemic sclerosis, Graft vs. Host Disease (GVHD), myeloproliferative neoplasm and myelodysplastic syndrome, HIV-1-infection, systemic lupus erythematosus, methicillin-sensitive staphylococcus aureus (MSSA), methicillin-resistant staphylococcus aureus (MRSA) and bacteraemia. The ADCs that are being used in this research include Brentuximab Vedotin and RG7861. The RG7861 antibody drug conjugate is an anti-Staphylococcus aureus ADC conjugated to dmDNA3.1 payload. The ADC is being studied in two phase I trials for S. aureus bacteraemia.

Furthermore, phase I studies are also underway into rheumatoid arthritis treatment using ABBV-337 which is based on Adalimumab (anti-TNFalpha) conjugated with a glucocorticoid receptor. This treatment has a different mode of action to that of brentuximab-based depletion of T-Cells. 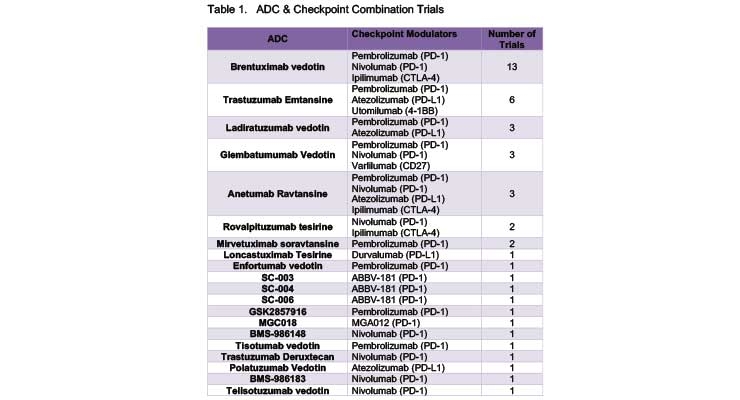 Pre-clinical studies using monoclonal antibodies to target non-cytotoxic drugs are growing. In the immune-oncology space, for example, the use of the antiCD11a mAb is being utilized to target a phosphodiesterase 4 inhibitor to improve the therapeutic index of the highly potent anti-inflammatory drug1 or liver X receptor agonists for an atherosclerosis indication.2

Chemical conjugation can be used instead of the fusion protein route to target a protein toxin or function protein. Examples of this include urease delivery, lintuzumab gelonin (L-DOS47),3ricin toxin A;  targeted delivery of siRNA4 and the formation of chemical conjugated Fab fragment based bispecifics.5

The ever increasing diversity of ADCs is reflecting a move to the targeted approach for a wider range of bioactives is important and must not be inhibited by the well-known supply chain complexity and cost of manufacturing.

The impact of ADC manufacturing innovation
Innovation is needed to shorten the development time of ADCs and to achieve cost savings in the ADC production. There is at present too complex a set of manufacturing processes carried out across multiple vendors in different geographic locations.

Advanced manufacturing process innovation
There is great potential for further development and greater application of optimized process solutions by the CDMO industry to significantly enhance efficiency. A cutting edge  example is the opportunity to utilize tools developed specifically for ADC development and manufacturing such as Lock-Release. This technique streamlines bioconjugation into four simple steps. The technology locks the antibody (mAb) to a resin, performs the conjugation, washes the locked ADC free of residuals and then releases the purified ADC.

The technology is central to a new integrated bioconjugation concept that is being verified—a technique in which one combined process achieves both mAb purification and conjugation. This integration of the Lock-Release-mediated ADC process into the platform mAb process is transformational. Lock-Release starts with antibody supernatants and facilitates both the antibody capture step and subsequent conjugation of the toxin-linker to generate the ADC.

Consequently, the starting point for conjugation will no longer be constrained to the use of purified antibodies as with this new process, it can instead begin anywhere between first capture of the mAb from the cell culture supernatant onto an affinity Lock-Release resin and the final stage mAb process operations typically employed. Due to the fact that this involves the handling of highly potent cytotoxins, it will require the conjugation and purification processes to be carried out by integrated bioconjugation CDMOs with the necessary high containment infrastructure. The regulatory requirements for viral inactivation, viral clearance and final polishing steps can then be met post-conjugation.

An integrated process saves an estimated 8 months in preparing Phase I material from a defined ADC candidate—24 months instead of 32.  This approach treats the antibody as a process intermediate rather than qualified drug substance. The technique eliminates repeated incoming QC analytics, mAb formulation and stability, shipping delays/risks and separate scale-up studies, reduces material wastage and involves less contingency planning. Compression of timelines by 8 months is critical in an oncology setting, and can be the difference between a life-saving or life extending option for patients.

Lock-Release affinity resins enhance the integration of the conjugation step into the mAb platform process, by providing both purification capability and compatibility with conjugation conditions.

This innovative, advanced manufacturing technique would revolutionize the ADC production industry—seeing the industry shift from the current separated process approach to one in which the entire supply chain is considered as a continuum with only the final ADC considered as a product.

The integrated process enables supply chain optimization; one CDMO facility can perform operations typically provided by 2 or 3 service providers (or separate facilities of one provider). The advantages of such an integrated process platform outweigh the effort involved in its development, validation, operational risk assessment and implementation of facility segregation.

Conclusion
The market is seeing significant growth in studies focused on the use of ADCs to treat other diseases and conditions beyond the realm of cancer with the numbers of such drugs in active clinical trials growing monthly. Furthermore, the use of ADCs in combination with checkpoint inhibitors is a further growth area in anti-cancer treatment with a large number of such biopharmaceuticals now in clinical trials.

The ADC drug market is set to see significant advances in manufacturing efficiency with the improvements achieved through process innovation. This will include the integration of bioconjugation with mAB purification through a highly novel downstream development process which provides the benefit of just one set of manufacturing, analytical development and release processes, reduces costs and speeds up manufacturing and development time by as much as 8 months. For drug developers who historically have been ultra-conservative in adopting changes to tried and tested manufacturing methods, the allure of significant extension of patent protection is a compelling reason to seriously consider early implementation of integrated processes.

Charlie Johnson is chief executive officer of ADC Bio (www.adcbio.com). He brings over 20 years of experience in strategic development, commercialization and management of service businesses within the oncology sector. His track record in the ADC segment goes back to 2004 when he established Avecia’s ADC manufacturing operations when the segment was in its infancy. Prior to joining ADC Biotechnology as chief executive in early 2012, Mr. Johnson held positions as director for the high potency division of Dishman Group’s Carbogen Amcis operation, headquartered in Basel and as business manager for the strategic marketing of the oncology portfolio of Italy’s UQUIFA. He previously held a series of pharma-related roles with ICI and Astra Zeneca.